Recently I was graced with the wonderful opportunity to interview Marian Newman.  Who is she? I first learned of Marian Newman approximately 15yrs ago when I joined an online forum of Nail techs; www.nailgeek.com (now known as www.salongeek.com).   At the time, I wasn’t much better than NSS (Non Standard Salon) although I didn’t know it.  I am from Quebec.  A province in Canada that has no regulations, nor standards for the Nail Industry of any kind.  They don’t even have health board inspections for the salons.  When I joined, upon perusing the forums, and asking questions; I realized very quickly that my knowledge was abysmal, and my technical skills even more so.  I could have chosen to tuck tail and run but I didn’t.  I opted instead to embrace the knowledge so generously shared by members of the forum.  Marian Newman being one of those valuable members, and femtors.   She and a handful of other fantastically knowledgeable Techs turned my fledgling career around in the right direction; from NSS tech with very little theoretical knowledge, to Safe Salon Advocate and Femtor to others.

Marian Newman joined our industry in 1987 and is currently a Sessions Tech for Fashion Shows, Magazine Covers, Music Videos, and Celebrities.   She is Author of ‘The Complete Nail Technician” that is a textbook that every Nail Tech should have on hand, a contributor to “Milady’s Standard Nail Technician”, and in addition has co-written other textbooks.

Her most recent project is the Nails Mastered Program, an educational program with students from all over the world, who learn by her side what it takes and means to be a Sessions Tech.  Her website is found here http://mariannewmannails.com/ .

If you ever have the opportunity to meet Marian Newman or speak to her, you’ll learn very quickly that she is a warm and energetic spirit.  Her personality can light up a space, and you can ‘hear’ her smile when she speaks to you. She is very generous with her time, answering questions and mentoring those with passion for the industry.  She has a no-nonsense approach that is softened with a genuinely caring heart.

I enjoyed my interview with her and please see the following for her words, not mine.  I think you’ll find her as inspiring as I do.

The interview ends there, followed by some giggles and chatter between us.   At present, I’m eagerly awaiting her newest edition of “The Complete Nail Technician”, personally autographed. I suspect I’ve been frightening the mailman with my intense observation of late.   When I embarked on this interview, I wasn’t sure what to expect, other than her usual kindness and humor.  I left it full of wonder, inspired once more to continue down the path I’ve chosen.  Is it any surprise?

Photo credit unknown, all ‘borrowed’ from her Facebook Page. 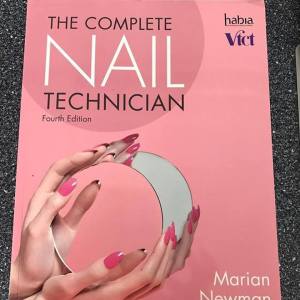 Some of my work